Just when we think the office Roomba has finally learned to do his job, he always seems to find a new way to mess up. The other day, he surpassed all expectations and went from incompetent to cunning.

We arrived to find the office wifi turned off; my coworker soon discovered that her mac charger was missing too. Of course, our first suspect was the Roomba – however, he was cleared of all charges when we searched him for evidence, and found no incriminating charger cables in his insides. The next hypothesis was that somebody must have come to borrow the charger, in the process of taking it accidentally switched the wifi off, and then forgotten to return it.

However, nobody would admit to the charger theft. As the situation was growing dire, and my co-workers poor mac was slowly nearing death, we ended up searching the entire office.

Not only had the Roomba managed to pull out the charger and turn off the wifi; he had dragged the charger to the opposite end of the room, and out of sight behind a large rack, hidden the evidence of his crime. After dropping the charger in the most out of place spot, he returned home to his nest (a feat he manages about 20% of the time, most days we find him stranded in the middle of the floor after eating something bad, or jammed under a shelf that’s aaalmost tall enough for him). Bad robot.

Today I started my day by knocking my oil cleanser into the toilet. I interpreted it as a sign that it’s time to try a new kind. So I got one whose name translates to “pee” in my native language, because I haven’t learned my lesson and will be keeping this one on top of my toilet too. 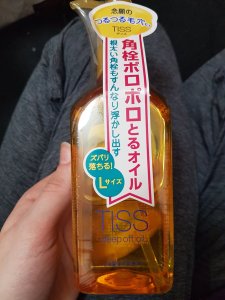 One of my favourite things about living in Japan is getting to try seasonal Kit Kats. Looks like this year for Easter we’re getting banana flavour.

Since Easter isn’t a holiday officially celebrated in Japan, I only realise it’s happening because of the Easter themed candy that pops up around this time of year. It seems to have been combined with the coming of spring (my work calendar does suggest that the spring equinox is a national holiday), into bright pastel imagery of eggs and bunnies and budding flowers.

I’m a total sucker for banana and chocolate combined, so I was pretty excited for these guys. Flavourwise I would have appreciated some more chocolate – Kit Kat gimmick flavours are generally white chocolate based, and while I do appreciate the bright yellow spring-y chocolate this allows for, I think this is one that would have benefited from prioritising a stronger chocolate flavour over aesthetic. While the package does claim that the ingredients include real banana, the flavour is definitely close to the typical artificial banana flavour – the one that’s based on a type of banana that’s gone extinct, and only lives on in its candy form. They do have a much more distinct taste than a lot of the white chocolate based Kit Kats – often the advertised flavour will just be noticeable in a vague hint in the aftertaste, but these were decidedly banana.

In a previous year, the Easter Kit Kat – I believe it might have been apple pie flavoured – came in a bunny shape rather than the traditional two sticks. In one end there was extra chocolate to form a face, and the stick shapes made out the ears. It was quite adorable, but it did make it harder to break the two pieces apart. So, I can see why the traditional shape would be preferable for those out there who aren’t filthy heathens who shove the entire thing in their face in one go.
Overall I enjoyed these, and when I come home today I think I’ll try eating them at the same time as some darker chocolate, to achieve my crunchy chocolatey bananaesque dreams.

I’m nearing the 1 month anniversary of introducing a bunch of new skincare into my routine, which means I should start to see any results any day now.

While my nasolabial folds remain unchanged, an ever deepening reminder of my fleeting youth and the crushing despair of my own mortality, I did have a dream tonight that my entire face peeled off so I guess that’s some kind of result.

This one is easy, maybe I’m the only person who didn’t realise these were different words until I saw them written down –

速い and 早い, read “hayai”. 速い means fast or quick, while 早い means early. Before learning their kanji I thought they were the same word, because if you get somewhere early you travelled quickly, right? In my defense I had just started studying, and I always forget how complex languages are when I’m just dipping my toes in.

If you know radicals and need a way to keep them apart; 速い has that squiggly radical that means road, because roads are where fastness happens – such as on a 高速道路 “kousokudouro”, or highway if you will.

早い is made from 日 (sun) and 十 (ten), because for me it’s waking up too early if the sun is still out, let alone ten am.

The button of my winter coat had come off. Rather than go through the gruelling effort of hunting down a new acceptable outerwear garnment, I decided it was time to woman up and learn to mend buttons (after several months of just wearing it with the middle button missing, either wearing it unbuttoned or closing it but with a gaping stomach gap). Armed with needle, thread, and an hourlong lunchbreak, I took to the internet and asked the allmighty Google, “sew button”.

The first result, the tutorial I ended up following, was from a website called Art of Manliness. Their preamble blurb included the suggestion that button sewing was a task usually left to wives or mothers, but it’s a useful skill for self-sufficiency. Now I may not be anyone’s wife or mom , but I’m definitely not the manlyman that I assume this website targets.

Is it the first google result because I am the only woman ever to not instinctively know this skill, and every other person who looks it up is of the male persuasion?

Or is it specifically a wives and mothers kind of skill, and the secret knowledge would have been whispered to me on my wedding night or while in labour with my firstborn, if only I’d managed to remain ladylike enough to not wreck my button before then? Have I ruined the sacred order of the universe by prematurely gaining this next level lady-knowledge?

But anyway, aren’t most button-wielding garnments for men? As someone who cherishes every second of sweet sweet procrastination in the morning, I simply do not have the time to be spending several precious seconds guiding tiny circles into fidgety holes every morning. With the vast array of ladyfashion available to me, I could still look elegant and put-together sans buttons, but for the professional gentleman a button-up shirt is kind of a must (of course, I do work somewhere where the dresscode basically amounts to “not naked? that’ll do”, so I have fully embraced the sweatpants and hoodie lifestyle, but if I ever were to join the ranks of ~fancy professionals~ I would still have some lady-priviledges in keeping up my anti-button lifestyle).

So, I gained a skill that the Art of Manliness deems “girly stuff”, but I learned it from a website about getting manlier; so, does my expanded skillset now make me manlier or more feminine?

Back in the olden days, all animals were 匹. When doing my pre-writing double-check-googling just now, I found one source that suggests this kanji gets its shape from a horse butt. Oh that makes sense, you much too optimistically think, I bet that’s because it’s used for counting horses, right? Weeeell… it used to be, but then English came along and ruined everything with its fancy phrases worth stealing.

I couldn’t find any confirmation for the following, but my more literate friend told me this a while back:

Natsume Souseki, also known as that guy with the mustache who used to be on 1000 yen bills until he was dethroned by that guy with the floofy hair, is the person who popularised 頭 as a counter for large animals. I did find confirmation that it was popularised in the Meiji era, and of its English origins. When counting cows, they’re counted with heads of cattle. Our boy Natsume Souseki decided this sounded really neat, and decided to count that way in one of his novels; 頭 is read as tou when used as a counter, but it can also be read atama, which means “head”. Ever since, tou has been used for large animals, and hiki for small ones.

Small animals, except for rabbits, that is. Rabbits are a special case, and are counted with 羽 wa. My dictionary tells me that when read hane, this means “feather” or “wing”. Wa happens to be the counter for birds, so the feathers and wings make sense. There aren’t any definitive answers as to why rabbits are counted as birds, but there are a couple prevalent theories. The first is that the Japanese words for “to fly” and “to jump” are pronounced the same (tobu, I believe the kanji are 飛ぶ for to fly and 跳ぶ for to jump, although I might be mistaken and they’re both 飛ぶ). This theory is generally countered with “frogs tho, they jump but are counted with 匹”. The second theory suggests that once upon a time, there were a group of monks. They weren’t allowed to eat animals, only bird meat. But, they really wanted to get in on some rabbit meat action, so they declared that rabbits are totally a kind of bird.